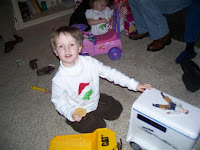 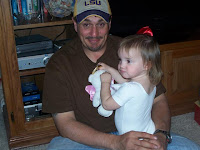 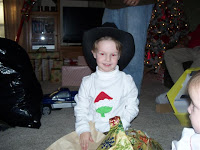 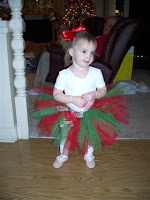 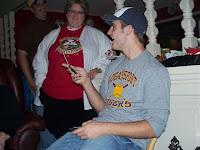 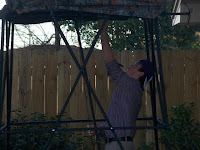 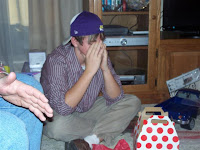 We had our family Christmas on Sunday evening, and it was so much fun watching the kids and grandkids open presents.
Cayden was so excited. He bought us all a present. His mommy took him shopping at the Dollar Tree, and he didn't forget anyone. I think the funniest one was a hippo figurine dressed like a girl that he bought Bubba. He bought me a cute little clown, Clay an elephant, Cody a dog that ironically looked like Duke, Nancy a pelican, Clayton a duck, and Tonya a wolf. He stood by each of us as we opened our gifts anxiously awaiting our excitement. It's so wonderful when kids are still so innocent.

Shelby was a little doll, and the social Queen of the evening. We had a few surprises planned for Emily, Cody, Bubba, and Clayton that they were not expecting, but Clayton surprised us being so emotional over the letter we wrote him to give him clues about his gift. He had all of us crying, poor baby. He was happy in the end when he finally figured out that he had a deer stand outside. You see in the letter we wrote: "Deer Clayton, We are so proud of you for taking such a strong stand in your beliefs, and some more stuff."
Bubba had already received his Christmas gift as he wanted to attend baseball camp at LA Tech, but we decided to go ahead and get his graduation present which is a red Ford '05 pick-up truck. Cody sent him a pic on the cell phone, but it wouldn't go through so he just finally showed it to him, and he was just spellbound.
It was all a lot of fun for us. The kids surprised us with an electric grill that we almost bought a few days ago. LOL
Anyway, Christmas is for giving, and we were glad to be able to give to our kids for always being such good kids and not putting us through the grief and problems that a lot of parents have had to go through.
We are so thankful to have made it through a very tough year not just for me but for everyone. There are a lot of people that I miss so much, and having had the cancer, and the hardest surgery I could ever imagine, has made me miss them even more. I just don't think some people appreciate what they have these days.
So I'm praying everyone that reads this has a Merry Christmas and the happiest of New Year's, and many blessings from God.
Posted by ShirleyC at 8:28 PM No comments:

I am counting every day, and every day just drags. I still have a lot to do at school before I "walk" out the door Jan. 15, but it's better than it was. Clay and Clayton came and helped me last Monday (8th). I was so exhausted, and then had a school party Thurs. night, and stupid me wanted to go shopping Friday night at the Boardwalk since we haven't been in so long. I paid for it the whole weekend. I had really planned to sew, but it didn't happen. I did start feeling better Monday. I have sure missed my Christmas sewing this year, but just haven't felt like it with everything else going on.

We are having Christmas with our kids and grandkids here on Sunday evening. We are all so excited. This is my favorite time of year. It just goes by so quickly. It's so much fun watching Cayden and Shelby, and thinking back to when our kids were that age. Even as they grew up, we always tried to do something fun for them to "find" their gifts. They always tried to outsmart us, but they didn't always succeed.LOL
Bubba and Clayton are also excited, and we enjoy them so much. I wonder what Santa has in store for them!!!! 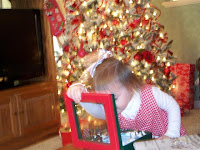 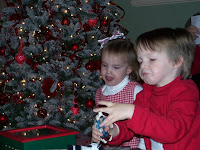 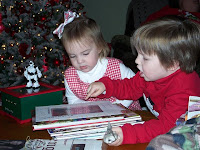 It's hard to believe that is all I have left, even though they will be some of my hardest days. The kids are getting so wired and hard to control.
We had a great Saturday with Emily, Cayden, Shelby, and Bubba at the Grand Cane Christmas Parade. It was an old fashined parade with horses, wagons, and buggies. The kids were so good, and they looked so cute. Cayden wore his snowman shirt I embroidered for him, and Shelby wore a darling outfit Emily bought, and her red coat PawPaw bought.
The pics are here at the house. Our friend, Jay Dawn. sent us this neat music box with the skaters going around. Shelby was just fascinated with it, and Cayden kept shutting it, so we had to limit their time listening so it will last until Christmas. LOL
In one picture, they are looking at my school pictures I left laying on the coffee table. It looks like they are in deep conversation - wonder what they're thinking?
Cayden wanted to open presents, but we finally convinced him it wasn't time. He has grown up so much this year. He talks enough for him and Shelby too, because she won't say much, but then she doesn't need to because Cayden will tell us exactly what she wants.
I hope everyone I know stays well through Christmas. There's been so much sadness lately, and the Christmas season seems to make people so much sadder when they've just lost a loved one. I know because I've been there.
God bless all of you!