Spirit of Christmas Past....

I am linking up to Laurie's Linky Party over at SewNSo's Sewing Journal. You can do it too! She is asking that you show handmade items of past Christmases. I just wish I had some from many years ago, but I have all of my pictures packed away somewhere.
Here is her button if you want to link up and enjoy the fun.
a href=”http://sewnso.blogspot.com">img src=”http://www.southern-stitches.com/Blog/cmaslinky.jpg”>
So I will just used some past Christmas outfits I made for my grandchildren. 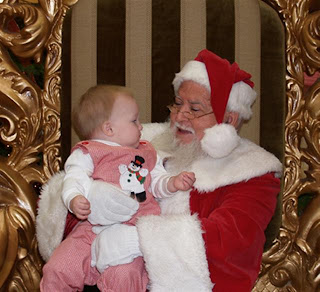 Let me start with Cayden. He was born in 2005. This is his first picture with Santa. I made the jon-jon. Here is a better pic of the outfit. 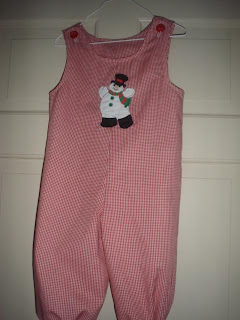 In 2006, he was nearly two as his birthday is in January. I decided to make a jon-jon that he could use for Thanksgiving and Christmas with a button on patch. 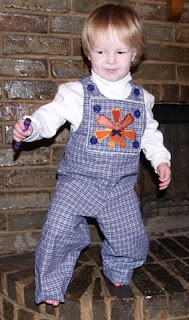 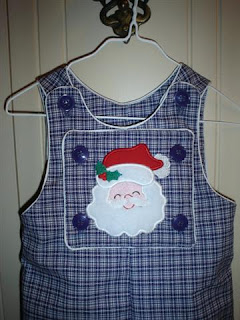 I had to include the Santa pic. He wasn't wearing the outfit, but notice it is the same Santa. 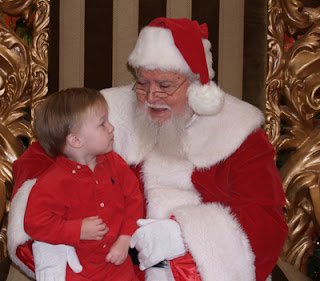 He outgrew the jon-jon look so I started embroidering tee shirts for him. Shelby came along in 2007. I made her a reversible outfit with the same Santa I put on Cayden's shirt. Notice the same Santa. 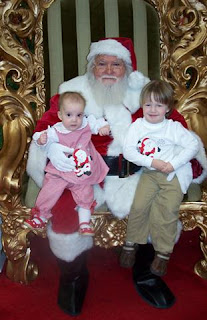 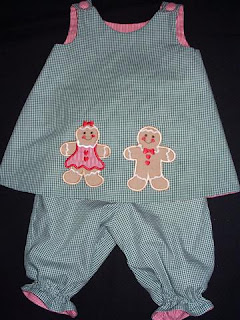 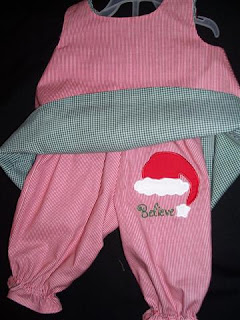 One side was green gingham, and the red side was red stripes. 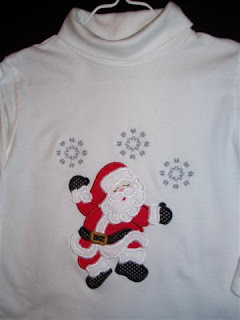 Shelby has not always been the most predictable when it comes to moods. Emily got this picture of her the year I did the Grinch appliques. Let's just say "it was perfect!" 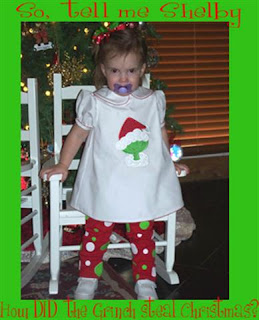 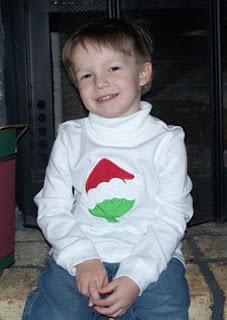 Again I have to include the Santa pic. Notice the same Santa even thought they are wearing RTW. Ummm...we must talk about this! 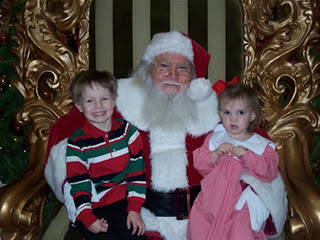 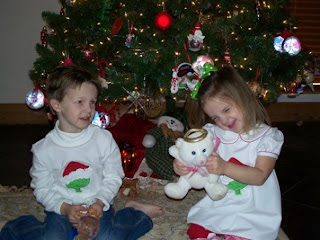 Yes, she looks much happier this year! 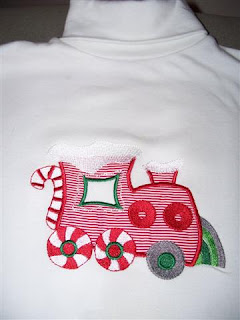 I embroidered this shirt for Cayden in '09. I think this is the cutest train ever!
Now for the Santa pic of 2009. So sorry to say that there was a different Santa. We don't know why, and sure missed him in the routine Santa pictures. 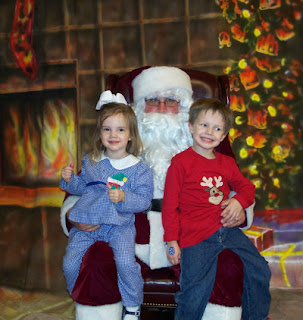 I also made Shelby a CC Callie with a simple monogram on the front. This was one of my favorite little outfits. She wore it through February. 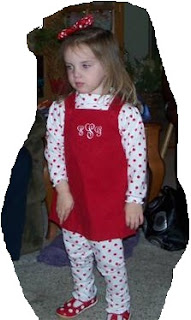 Now this year all I've gotten done so far is those pajamas that nearly drove me nuts, but they did turn out really cute. I plan on doing a few more things.

I enjoyed my trip into the Christmas Past. I love Christmas and being with my kids and grands.

Merry Christmas to all! This was the Polar Express Santa! 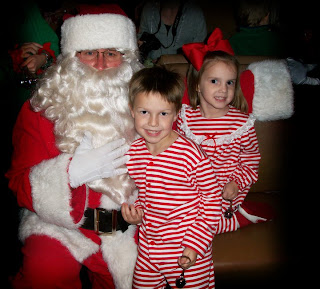 Love your post, Shirley! Glad you posted alot of boy stuff, b/c it reminds me that I need to get busy sewing for my grandsons! Isn't it funny how the same Santa is at the same place year after year? I love all your reversibles - very clever with the boy's jon-jon too! Thanks for participating in my Linky Party - it was a pleasure visiting your blog!

WAHHHHHHHHHHHHHHHHHHHHH! This reminds me of pictures from the past of my Babies with Santa.... All dressed up and lookin' spiffy.

I love it all. PRECIOUS!

I love my visits to you sweet friend. So inspiring!

You are so funny Shirley about the Grinch pictures and the Santa. Your outfits are adorable and I hope you don't mind if I copy some of them!! :) I LOVE your Polar Express jammies from this year too!! I saw them quickly somewhere (fb or your blog) and didn't take time to comment but I was so impressed! They turned out wonderful.

My goodness, time has flown by, look how much they have grown and I remember you doing all that sewing. They will get a charge out of your pictures when they get older. LOVE the grinch photos.

Hi Shirley! I know you from SF and recognize your cute cute sewing! I LOVE all of the reversible outfits you've made. Oh how I wish I could have had time to sew for my children when they were little. Your work is very inspiring and your children are precious! Glad to see you here!

Back to blog reading and so happy....Loved all your pictures...

You are soooo talented!!! I love all your creations....and your GRAND-babies are adorable!

Such CUTE outfits, Shirley!! I remember seeing most of them but not all. I loved seeing the changes in your grands, too. They grow up waaaay too fast, huh?

Hope you're enjoying the magic of the season.

Oh my goodness - I loved your post and all of the adorable clothes you made for your darling grandchildren. You are very talented - how fun to sew and create memories for your family.
Merry Christmas to you and your family.
Blessings,
Erin

Cute pictures!! Thanks so much for your help by giving me feedback on the "blog issues"...I really appreciate it!:)

Gosh those are all so cute! The gingerbread men is my fave, but really are all so beautiful