Do you remember "The Blob?" 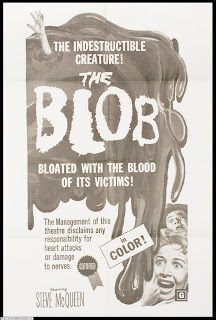 If you remember when this movie came out (unless you've seen it on Sci-Fi), then you would have to be close to my age.
I don't know what made me think of this, but I have to tell this story.
When I was a kid, my mama worked in downtown Shreveport for the Christmas holidays. We lived quite a ways from downtown, and we would ride the city bus to go and meet my mama to ride back with her after work. Sometimes I even went by myself. Can you imagine that this day and time?
I actually think this particular day my mama went shopping, and she let us tag along. My brother is nearly 4 years older than me. He wanted to go and see this movie "The Blob". I had no clue what it was about so I agreed. Mama said I had to stay with Robert. 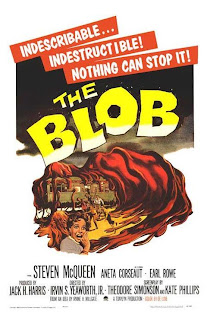 (You can read about it below). To continue, we go in and sit down in the theater. The show comes on, and this meteor falls out of the sky. It burst open, and this jelly stuff rolls out. Then some fool that saw it fall from the sky picks up a stick and pokes the jelly stuff. The jelly stuff crawls up the stick and onto the person. Of course, he can't get it off.
So far, so good. Then the stuff started getting bigger and bigger from the people it ate. Let's just say that by the time it was out of control, I was scared stiff! I got up and ran out of the theater at least 3 times. My brother kept coming after me and dragging me back inside, and he finally SAT on me to keep me in there.
OK, this was 1958, and I was about 8 or 9.  Our television programs were very mild - like Red Skeleton, and I Love Lucy!
I'm telling you I was traumatized! I can't remember much else past this point. I think it was many years before I could ever sit and watch the show and not shake like a leaf. LOL 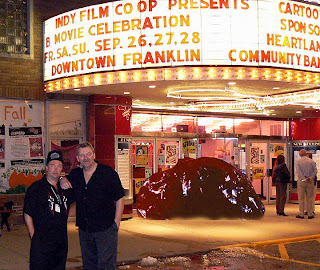 From Wikipedia:
The Blob is an independently made American horror/science-fiction film from 1958 that depicts a giant amoeba-like alien that terrorizes the small community of Phoenixville, Pennsylvania. It was not until star Steve McQueen became famous with the TV series Wanted: Dead or Alive that the film became a hit at the drive-in theatres.
Posted by ShirleyC at 10:13 PM

Inspiring You To Save! said...

Visiting from the Blog Hops! I love your site. I can't wait to get to know you better. Stop by when you get the chance. I have a Meet Me Monday blog hop and I would love if you could join in.

I remember the BLOB & I was just as scared as you!! LOL I was very impressionable, too. Lots of nightmares!
~shiver~

I didn't see the blob, but have definately been frightened enough at theatres to run out!

Have a great day and if you get a chance, stop by http://christiecottage.blogspot.com/2010/09/friday-fun-in-search-of-smile_17.html

I kinda remeber it but don't think I have ever seen it..stopping by from friday follow over forty and am your newest follower stop by sometime...

I think if I saw it now...I would be surprised! But I remember being so scared at these movies! You've got quite an event to remember! ♥

Scared me awful..probably still would today even though it is so fake looking!

Why am I just knowing that you blog....your grandkids are my neighbors....I think...and I just saw where Emily blogs...Have you commented on my blog a lot and I have missed it...

email me at annah99@aol.com so I will have your email....I just added you to my sidebar and will add you on my holiday blog.....A BABY CHANGES EVERYTHING


I have only blogged for a little over a year but have made so many great friends....

That was probably a long time ago...We do about 75 houses now...We start this year on Oct 22

I have not seen this movie nor heard about it. But it's good to know about it through your post. Thanks :)

The Blob came out the year I was born... I saw it when I was about 8 on TV and was totally freaked out. I can't handle movies like that to this day...

If it is SCARY then FORGET IT! I'd rather have spiders on me than watch something try to eat me up! If you know anything about me then you know THAT is saying something! :)